Plenty of headwinds for growth

Plenty of headwinds for growth

Monthly GDP was 1.5% above pre-pandemic levels in February, however the UK economy grew by just 0.1%, falling short of the 0.3% growth predicted by market analysts. Despite a strong resurgence in tourism activity, growth has slowed sharply since January, when output jumped by 0.8% as people returned to normal life following a surge in Omicron rates in December 2021.

Manufacturing contracted by 0.4% and was the main driver of negative growth. Ongoing supply and labour shortages as well as substantial inflationary pressures weighed on manufacturing. 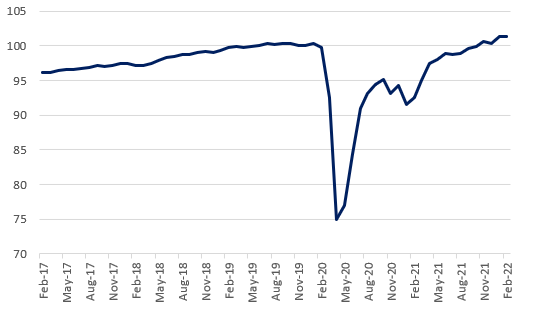 These figures largely precede the invasion of Ukraine which means that the supply disruptions and price rises brought on by the conflict will only be reflected in the figures of the coming months. It’s expected that UK GDP will contract in the second quarter, as firms will reduce their investment and households spending will slow down.

The food and drink sector seems to be particularly vulnerable to current market upheaval. An ONS survey found that 63% of the food and drink businesses (which included manufacturers, wholesalers and retailers) reported in March that energy prices had already had an impact on production and/ or supply. That compares to 38% across all UK sectors. In addition, the food and drink businesses were twice as likely than the average UK business to report additional transportation costs, higher costs due to increased red tape and extra costs for imported production factors.

In the wider manufacturing industry, 52% of manufacturers reported global supply disruptions in March, up from 44% in February and above the UK average of 28%. March manufacturing output also showed a marked slowdown, according to the S&P Global UK Manufacturing Purchasing Managers’ data, with growth in both output and new orders decelerating. Not surprisingly, geopolitical tensions and high inflation, which shows no signs of abating, are negatively impacting the recovery of the sector. Moreover, the industry is likely to contract in the second half of 2022, as the current extraordinary economic uncertainty and pressures on consumer finances will mean businesses will halt investment.

Households are feeling the hard pinch of the highest inflation in 30 years, particularly as energy and food prices are rising. The significant jump in consumer borrowing in February is telling of the financial burdens on households. Individuals borrowed a net of £1.9bill, £0.9bill above the 12-month pre-pandemic average up to February 2020. Credit card borrowing made up the lion’s share of the borrowing in February, which is another sign of distress, with less affluent households more likely to borrow using a credit card.

Looking ahead, headwinds are intensifying. Russia’s economy was the 11th largest economy worldwide and one of the main global producers of different agricultural goods and energy. The decoupling from the Russian economy puts the food and drink manufacturers first in the line of fire, as they will withstand the worst of disruptions in food supply chains and energy cost rises.