The UK labour market remains hot, with the undesirable pattern of severe shortages and high inactivity alongside falling real wages continuing. The unemployment rate inched down to 3.8% and vacancy rates remain at record high of 4.3%. And while the inactivity rate persists above pre-pandemic levels, it has come down in May - an early sign that the labour market may begin to cool off soon.

There were a record 1.3m vacancies in the UK in Q2, with staff shortages across all UK sectors. The good news is vacancies have been increasing at a slower pace. Unfortunately, the reverse is true for the food and drink manufacturers, who report higher vacancy rates than the average UK business and accelerating at increasing pace. Specifically, there were 6.3 vacancies for each 100 jobs in our industry in Q2, up from 5.2 in Q1. Food and drink manufacturers had difficulty recruiting for all kind of roles: from production operatives and drivers to specialist roles, like butchers or flavourists, to engineers and IT roles. 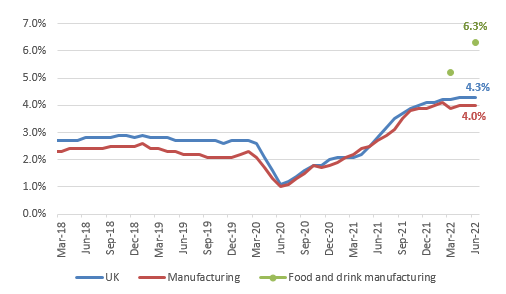 These severe labour shortages are due to there being about 1m fewer people in the labour market now than before the pandemic. Of those, three quarters are people who chose to retire early. An ONS survey found that about a third of the over 50’s who retired early would consider returning to work, with half of these motivated by financial reasons.

As the cost of living is biting hard, we may see more older people rejoining the labour market and easing some of the current pressures. Today’s figures show that over the three months to May regular pay rose by 4.3%, below the inflation rate. Which means that in real terms wages fell by 2.8%, the highest decline on record. Slower pay growth than inflation shows high inflation expectations are not yet engrained in the British public’s mind, which would make bringing inflation under control much more difficult.

Moreover, as households are getting poorer, they are cutting their discretionary spending, slowing down the economy. However the silver lining is this would also put downward pressures on prices.

We’d like to see a coherent plan from the next Prime Minister on how government will act to create the conditions for new investment and to boost productivity. The UK Government’s newly announced independent review into labour shortages across the food chain is welcome, but we also need to see the skills system work better right across the country as well as a reformed and more flexible Apprenticeship Levy.